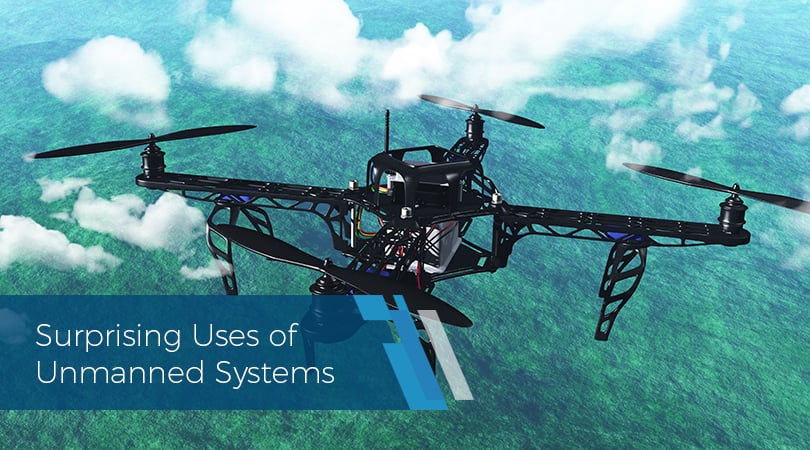 Did you know that the elephant is the only land mammal that can’t jump? True story. Some other interesting facts – Taylor Swift has won more Grammy awards than Elvis Presley, the popsicle was invented by accident – and with the combined growth in sophistication of artificial intelligence and robotic hardware, it is not uncommon for unmanned robotic systems to be used in scenarios completely unrelated to defense, surveillance, or any related combat scenario. Given the association between robots and the technologically heightened military age, it may be surprising to hear that unmanned systems hold a wealth of promise and application in diverse humanitarian causes.

Recognizing the potential for unmanned systems to save lives – the state government of New South Wales, Australia invested over USD 400,000 in the training and use of drones in the case of dangerous tides, natural disasters, and shark sightings. The timing of this investment is notable, considering shortly after this investment the drone (Little Ripper) was vital in the rescue of two swimmers. Caught in turbulent waves, it took Little Ripper 70 seconds to deploy, locate the swimmers, and drop a life-saving raft towards them, allowing the swimmers to grab onto the pod until safely onshore.

One of the chief advantages of drones is their ability to easily navigate areas that are dangerous or inaccessible to people. With this in mind, Oil Spill Response Ltd (OSRL), a British firm specializing in the prevention of oil spills, launched an Unmanned Aerial Vehicle service, for the purposes of advancing preparation and response capabilities in the event of an oil spill. OSRL identified numerous scenarios in which UAV’s could play a vital role: such as containment and recovery missions, on-site security, and surveying. OSRL leadership, as well as their clients, have already seen the benefits in their operations as well in operation cost-effectiveness.

Drone technology caught the attention of the United Nations last year, as their World Food Program (WFP) has embraced the technology to mitigate risks in their endeavor to address hunger in third world countries. Last year in Mozambique, the WFP provided drones to the government’s disaster management agency to survey flood-prone areas. The drones forwarded this data back to the agency who were able to move the families at risk of flooding to safer areas.

With the use of drones, the WFP also assisted nearly 60,000 people in various villages of Madagascar in order to distribute food and other resources. Efficient dams, canals, and roads are crucial in terms of sustainability. By targeting specific villages, unmanned systems are used to map terrains, synthesize data, and distribute this data to conduct a vital risk analysis to support successful food distribution.

Tomahawk Robotics prides itself on the strides it has made to provide affordable robotics-based solutions for individuals with physical disabilities. Applying the user-centered design principles that are responsible for so many devices and applications we take advantage of today, Tomahawk’s Kinesis relies on intuitive gesture-based controls via smartphone, and external hardware use, in order to extend the independence and capabilities of wheelchair users.

For more information on the varied and diverse uses of unmanned systems, please visit tomahawkrobotics.com/solutions/.