What is Enterprise Robotics? 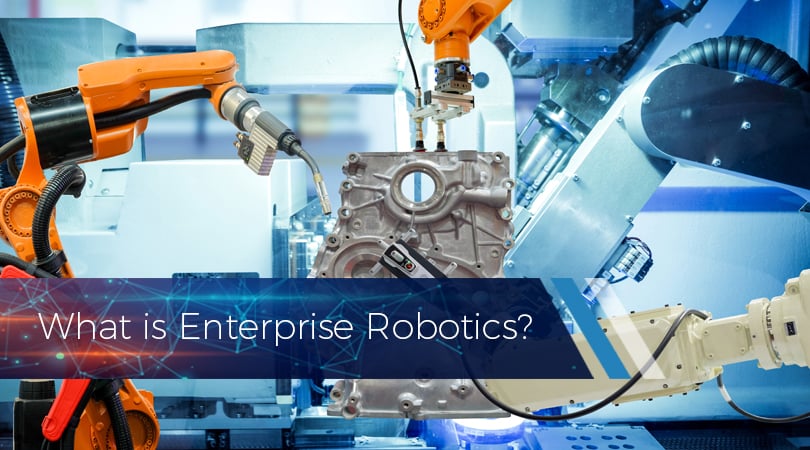 It’s an unfortunate reality in the world of robotics, how misconceptions often overshadow the development and research of such technologies. Where robotics were once tethered to military applications, then adopted the identity of tackling the “dull, dirty, and dangerous” jobs – it’s understandable why small and medium-sized companies don’t see the potential for compatibility in their workflow. The misconception that robotics are limited to these areas, however, have created a delayed embrace from enterprise markets. Robotic solutions are evolving at breakneck speed, and are targeting areas such as customer service, shipping and delivery, hospitality, and so much more – helping define a new era of enterprise robotics.

Chatbots gained momentum by functioning as 24/7 customer service agents. By programming a bot to quantify common cues, chatbots could reasonably simulate a cadence of a conversation, as if one was being had with a real person. As AI grows in its understanding over time, chatbots become increasingly more capable – mitigating tasks and time for a company by creating and sending email correspondences, generating news and financial reports, and countless other administrative and marketing-related tasks.

Last year, UPS obtained FAA certification to provide drone delivery services, Walgreens announced in a press release that they will be testing on-demand drone delivery of health and wellness-related items, and Jeff Bezos anticipated that Amazon would be delivering packages within 30 minutes of placing an order. While none of these endeavors have quite yet come to fruition – the climate is very easy to read: companies (big ones) and consumers want the crazy fast, personalized, and convenient delivery of goods that drones are uniquely capable of providing. Delivery drones are not a new idea, as federal regulations slow the process down of market readiness, they’re not quite as ubiquitous as Jeff Bezos intended them to be. However, these small steps forward are monumental in how companies regard and hope to apply robotics to their workflow.

Whereas human exploration continually extends its reach, often viewing the cosmos as “the final frontier,” the opposite is true for robots. Shedding their image of bulky arms and factory-friendly appliances, robots are getting personal. Comforting, personal, sociable – typically, these words have only described robots in fantastical science fiction – however, mountains of research are being conducted into the potential and applications of social robots.

"We want robots that can learn from us, that can teach us, that can be aware and anticipate what we're doing," says Deborah Forster, Ph.D. With the goal of programming, teaching, and acclimating robots for unlikely environments, such as schools, hospitals, and workplace environments, researchers are discovering promising results from early studies. Case studies like RUBI, a robot designed for early childhood education, and Paro, a responsive robot designed for therapeutic uses, rely on the same robotic technology found in factories like sensors, cameras, and clever programming. However, enterprise robotics means tailoring this technology for giant solutions on much smaller scales.

A New Era of Enterprise Robotics

Tomahawk Robotics has decades of experience building remote robotic systems. From this foundation, we’ve developed Kinesis, the world’s first robotic IoT (internet of things) control system for enterprise customers. These are only a few of the examples of what enterprise robotics looks like – to learn more about intuitive and scalable solutions for enterprise robotics, visit tomahawkrobotics.com/kinesis/.